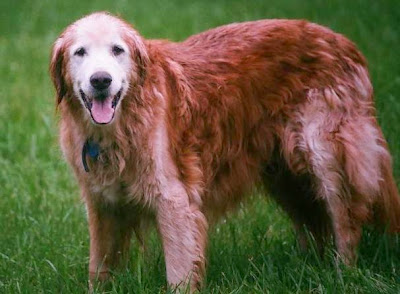 It's no secret that I love the senior Goldens but I have to admit to being more than a little partial to the boys, they are my favorites.  There are people who will say that there is no difference between the boys and the girls, but I think there is. The girls are always a bit more serious, more focused and sometimes stubborn.  The boys just aren't that way.  I find them to be silly, funny and so often, charming and endearing.  Those are some of the same words that I would use to describe the next senior boy who would become part of our household that I named Cowboy. 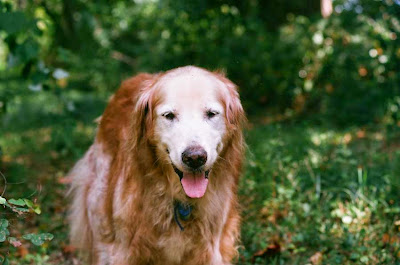 It was around Valentine's day in February 2008 and I was asked to foster a senior Golden that was picked up as a stray, and was on his "last day" in a shelter around Charleston West Virginia.  When Carl and I first saw him, he was leashed to a tree in the backyard of a transport volunteer.  When he saw us, he stood up and started wagging his tail, and happily barking at us as if to ask where we'd been. With the leash in hand, he walked right over to our van and put his front feet up on the open side door, a signal for us to help him in and to get on with his adventure! Needless to say, I was totally smitten!!  However this boy that we'd just met had no name and several people suggested we name him something associated with Valentine's Day. But I named him "Cowboy" for a couple of reasons--He had on a rope-like collar, and with bowed-legs bent from age he walked with a slight limp. Along with a few missing front teeth it reminded me of a cowboy, and the name just really seemed to fit. 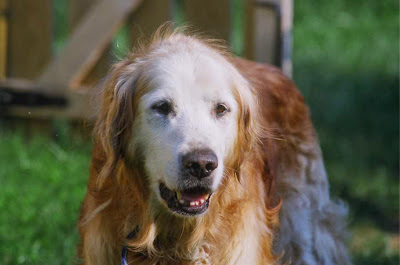 As we got to know Cowboy, it was easy to see what a kind, gentle and old soul he was. I've no idea what his prior life had been, but I had no doubt that wherever he was, he had to have had a few friends, he was just so charming.  Because he also got along so well with our dogs it didn't take long to decide that Cowboy should become a permanent member of our household; we adopted him that March. 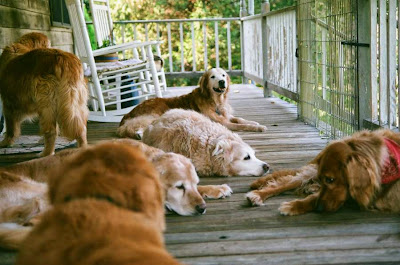 Cowboy was always smiling and when he wagged his tail, it went in a big circle that was like a slow propeller.  He was all I loved about the male goldens; happy, big and really silly and really goofy.  He was also a handsome boy with a deep red curly coat and a totally white face, head and legs.  Cowboy had a little bit of laryngeal paralysis that caused him to have that raspy old dog bark that was always telling me when he wanted something--If his barking didn't get the attention he wanted, he would grab a hand or shirt, or whatever he could and pull you towards what he wanted, which was usually something related to the kitchen. He loved to eat! 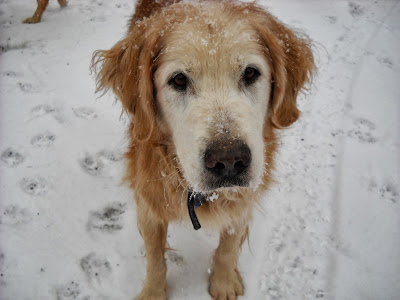 My days with Cowboy always seemed brighter. On our walks he was always finding something to roll in, or would just stand there and bark and wag his tail.  His always present silly smile, never ever ceased to put one on my face too and everyone that met him. 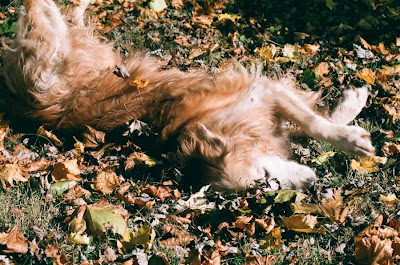 Our time with Cowboy would come to a sad end in March of 2010.  The winter had been a cold one with deep snow.  He'd been having problems with arthritis and he was having difficulty getting to his feet.  Soon he lost his appetite and would lay for hours in the same place. Outside there would be none of his continual tail wagging or barking, and there would be none of his usual rolling on whatever he could find.  Despite giving him pain medications, nothing seemed to help.  I could tell that his spark was fading. I took him to the vet on a cold rainy Saturday, hoping that there was something that could be done.  But it was decided that there was nothing; the kind thing to do would be to let Cowboy go and end his pain. 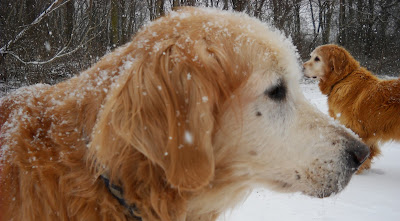 We had little time for goodbyes...I held Cowboy as he slipped into a deep sleep, leaving this life for the next and taking a big piece of my heart with him. Even now, more than three years later thinking about him still brings a smile to my face. Cowboy was one of those rare and special dogs who come around once a lifetime. Yes, we've had and will have other silly-goofy-male Goldens.  But he was in a class by himself and just like other Cowboys, he is a legend in our lives and there will never be another Cowboy. 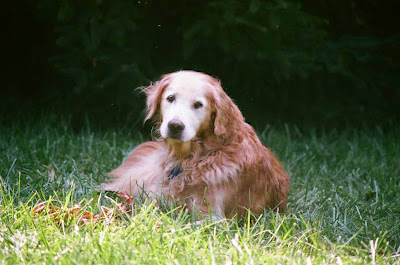 THANK YOU for taking time to read our stories. I hope you'll stop by again when the next story is posted.

~Kim at Golden Pines~
In 2007 my dream of living in the country and sharing it with senior Golden Retrievers came true when we moved to a small town in Northern Virginia into a home that would become 'Golden Pines.' Our lives are now filled with more rescued Goldens and Labs than I'll admit to, a Wheaten Terrier, a lively little Scottie named Todd, and one very tolerant cat and one that's not tolerant at all. This blog chronicles snippets of a life that has truly 'gone to the dogs!'

Is Where We Hang Out

Other Blogs to Visit